Lorain Police Dept. brought in an emaciated pitbull on Saturday, December 2, 2012.  He is in our care at the moment and is day by day.  His care will be long term and will be a rough road.

We named him Herbie.  Donations are being accepted.  You may send a donation to the Wood Foundation in care of our clinic.  We will periodically be updating our website with his condition.

Update 12/5/12: Today Herbie was holding his head up for us and has been eating from our hands.  He still has a long way to go, but it is nice to see slight improvement.

Update 12/6/12: Herbie is showing improvement.  He is able to eat out of a dish and hold his head up. The swelling in his head has been reduced by 50%.  He sleeps quite a bit.

Update 12/7/12:  Came in this morning to Herbie hugging one of the stuffed angels sent to him. His appetite is increasing.  He stood on his own yesterday for the first time, but can't stand for very long.  Herbie is very thankful for everyone's generous support!

Update 12/10/12: Herbie is weighing in at 43 pounds today! With him eating every few hours, we are happy to see him putting a little bit of weight on.  Herbie was very grateful for the turn out for the Awareness Walk yesterday!

Update 12/12/12: Swelling in Herbie's head is really starting to improve.  He has gained another pound today.  He is really enjoying his trips outside!  His tail really wags!

Update 12/13/12: Herbie is outside enjoying the sunshine today.  He has made several trips out and wags his tail each time!

Update 12/14/12: Herbie thanks everyone for their generosity and prayers!

Update 12/17/12: Herbie's weight gain has slowed down, which is to be expected, and he gained a half pound over the weekend.  He has an appointment on Wednesday December 19th with the ophthamologist concerning his cataract.

Update 12/18/12: Herbie would like to thank everyone for their gifts but he has limited space to keep things! Toys, blankets, and treats can be donated to your local shelters in Herbie's honor.  Herbie is looking forward to his appointment with the ophthamologist tomorrow.

Update 12/19/12:  Herbie is now up to 51 pounds!! Herbie's bloodwork is slowly improving.  Dr. Wood is taking Herbie to the ophthamologist today, so we will have more information tomorrow concerning his appointment.

Update 12/20/12:  Herbie went to Akron Veterniary Referral to see the specialist.  He may have underlying cancer and a biopsy was taken.  Results will not be available until after Christmas.  He is doing well though, and gaining weight everyday! 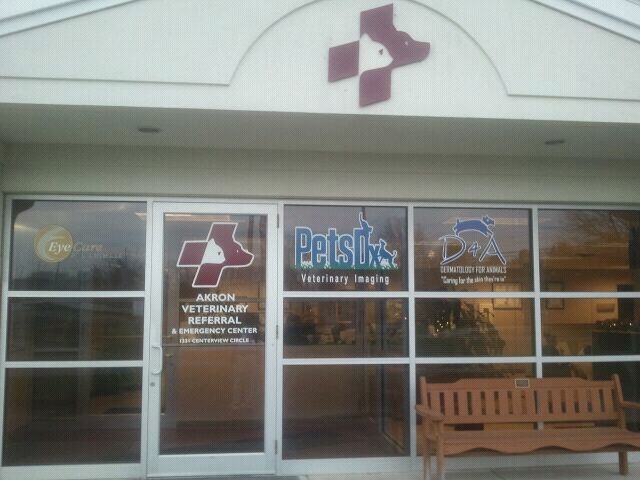 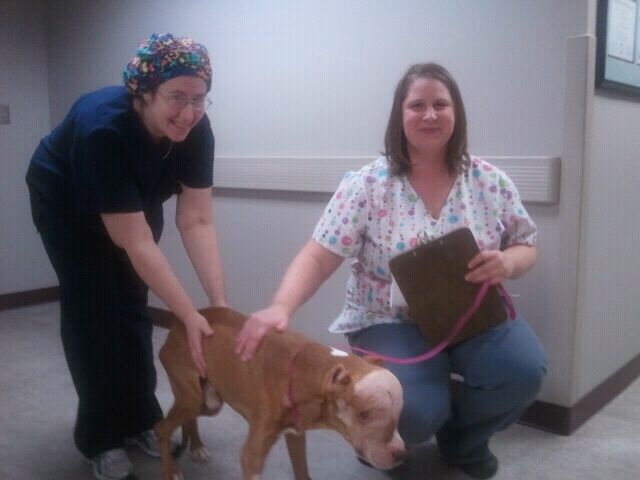 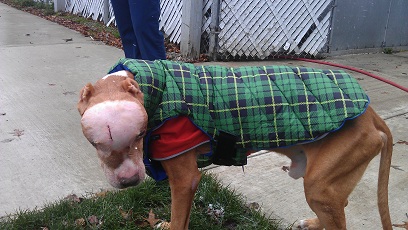 Update 12/26/12: Herbie, who has been touching everyone's heart, received his biopsy results indicating that he has underlying cancer.  So in addition to battling his malnutrition, his previous traumas, he must now fight his biggest battle of all.  He is in good spirits and is eating and gaining weight.

Update 12/28/12: Herbie's diagnosis from the specialist is that he has adenocarcinoma. It is non-operable and non-responsive to chemotherapy and radiation.  Herbie is enjoying his time with our staff of 20 including Brittany and Melinda (seen here with him). He looks forward to his walks outside.  At this point in time Herbie is happy, eating well, and most importantly pain free. 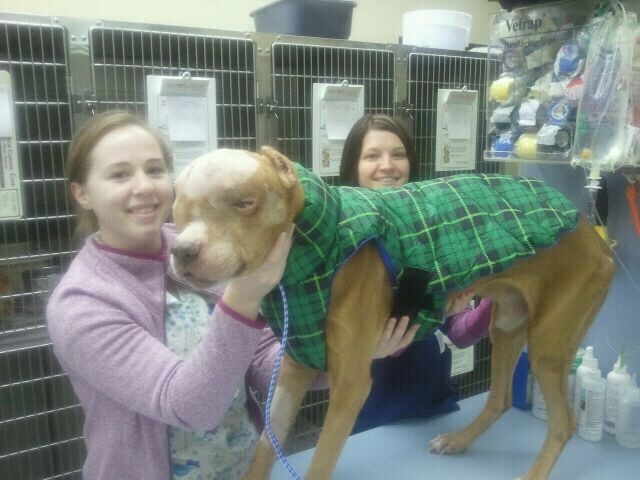 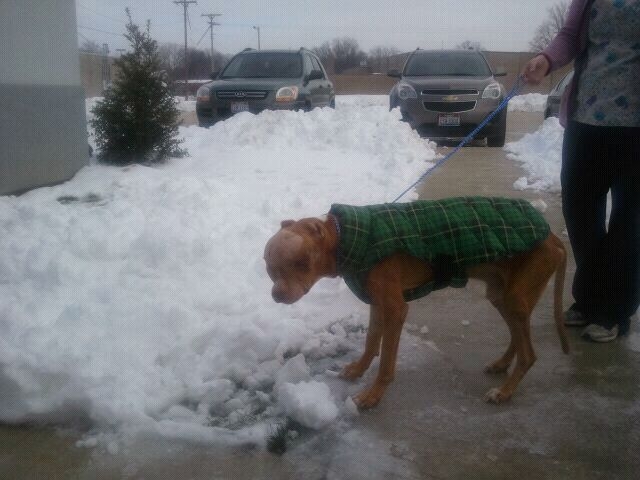 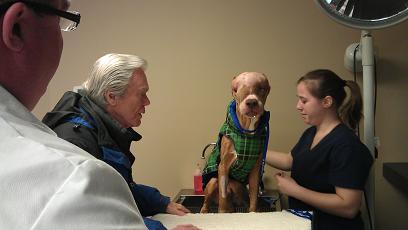 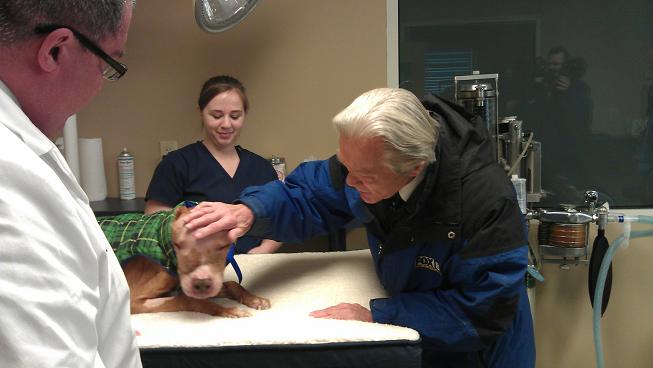 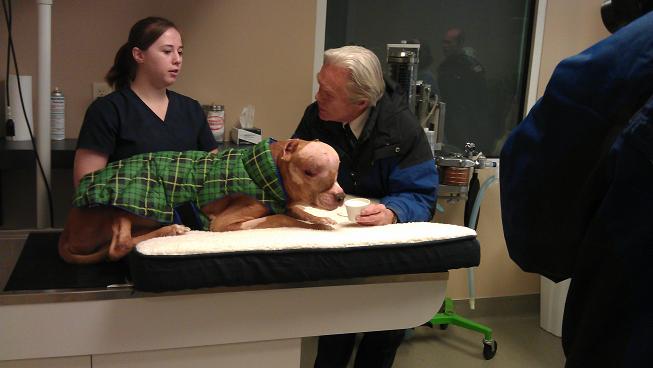 Update 1/08/13:  Herbie has gained 5 more pounds and is currently at 55 pounds!  His cancer has not progressed enough to interfere with his quality of life.  He is happy and wags his tail daily.

Update 1/11/13: Herbie is looking foward to being able to spend a weekend or two with Officer Broz soon.  He sure has Officer Broz wrapped around his paw!  Today Herbie convinced him to feed him by hand.

Update 1/22/13: Not much has changed with Herbie.  He was able to spend the weekend with Office Broz and was completely spoiled.  He has quite a bit of drainage from his head, but it isn't slowing him down.

Update 1/24/13: As posted before, not much has changed with Herbie.  If you would like to see his weekend with Officer Broz, like the page "Justice for Herbie, the abused Lorain, Ohio Dog" on Facebook.  Officer Broz commented throughout the weekend with Herbie.  Here is a picture of Herbie sleeping on one of the many beds he has here at the clinic. 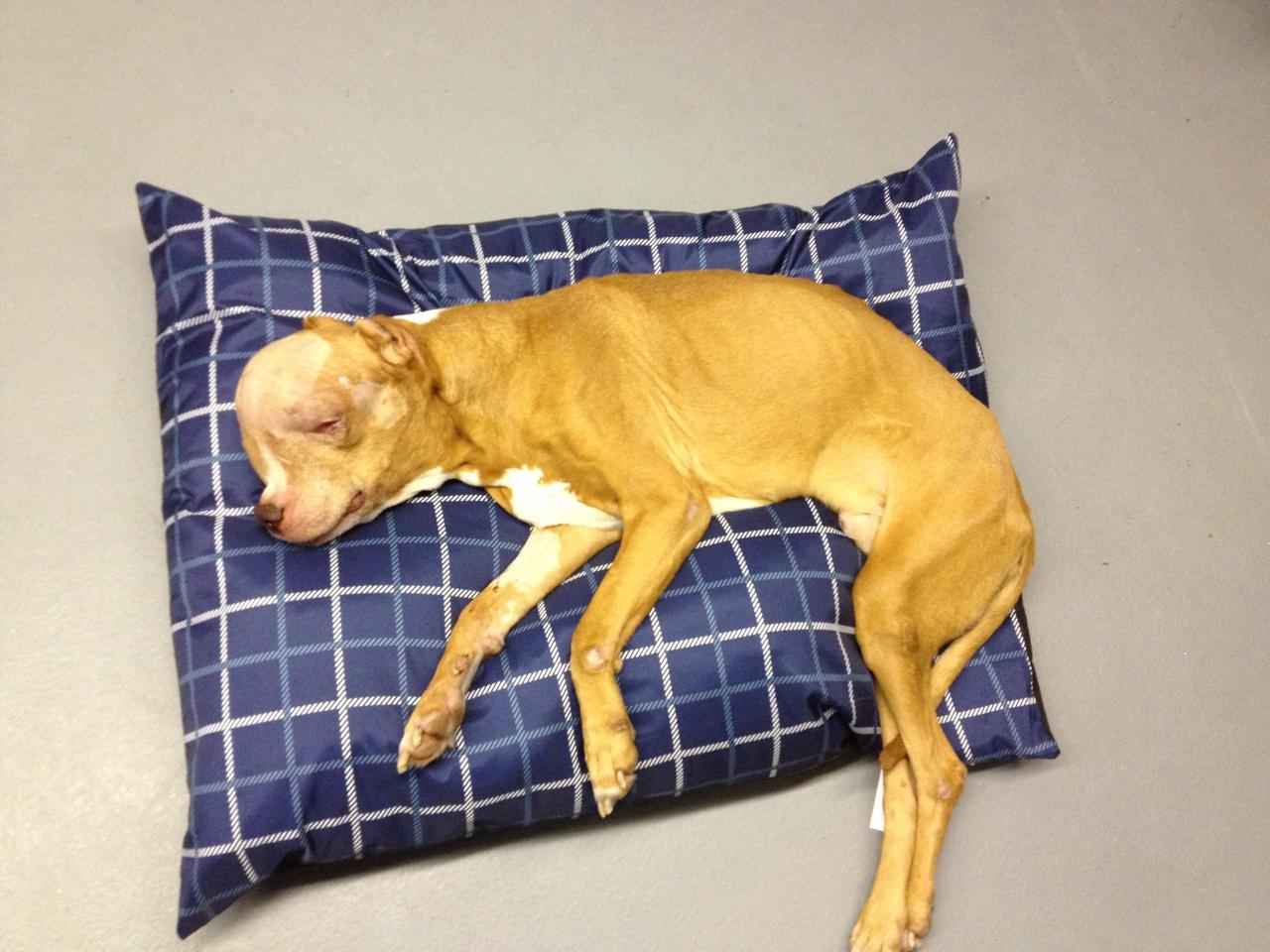 Update 1/29/13: Herbie just returned from Officer Broz's house, where he spent the weekend.  As always, Officer Broz spoiled him while he was there and has been sleeping ever since.  He seems pretty content!

Update 2/7/13: Herbie was on the scale today and has gained more weight and is up to 60 pounds.  Officer Broz must be really spoiling him on his visits!  Herbie is looking forward to his weekend with Officer Broz and is resting up for his trip to "the man cave"!

Update 2/11/13: Herbie just returned from his weekend with Officer Broz. He met Emily Valdez from Fox 8 and was spoiled with eggs and bacon for breakfast. Don't forget, if you want to follow more updates on Herbie, like the page "Justice for Herbie, the abused Lorain, Ohio dog" on Facebook.

Update 2/18/13: Office Broz is on vacation this week so he is spending quality time with Herbie.  Follow them on "Justice for Herbie, the abused Lorain, Ohio dog" on Facebook.